Due to the progressive ingenuity within the laparoscopic environment, efforts in human surgery are now directed at further minimizing morbidity. One of the emerging concepts is a platform called reduced port surgery. This platform has led to the development of new techniques, devices, and instruments that allow laparoscopic procedures to be performed through mini laparoscopy (multiple mini cut for miniature instruments even smaller than laparoscopic instruments) or through single Incision laparoscopic surgery (a small single skin incision 2 to 3cm in length which often hidden within the umbilicus, and using specialised curved / roticulating instruments). 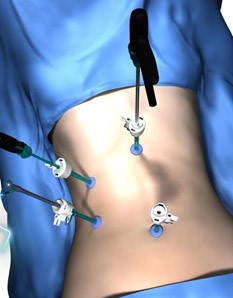 Mini Laparoscopy is very similar to laparoscopic surgery. However, it uses ports and instruments of 3 mm unlike 5 mm & 10 mm instruments in conventional laparoscopic surgery. We can call it as a bridge between laparoscopy & single incision surgery. The use of 3mm high tensile instruments will still reduce the already cosmetic scar and reduce pain significantly as well. The staplers are used through the umbilical port using a 12 mm port which will eventually be hidden with in it. Mini Laparoscopy has not gained much popularity due to the non availability of wide range of instrument options like in laparoscopy. Future generation of instrument designs may make it more viable, but as of now it is practiced only in very few centres across the globe. 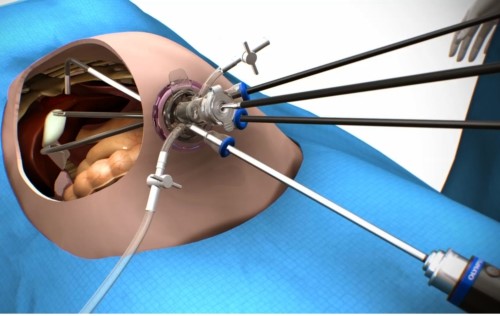 This technique famously called as SILS / LESS / Single port Surgery is applicable to all fields that deal with organs inside the abdomen. With the huge success of SILS in cholecystectomy, it has found its application literally in every surgical speciality, more so in Bariatric Surgery. The presently more successful SILS procedure include Sleeve gastrectomy. Though SILS faces difficulty in manipulation and traction of tissues as well as ergonomic challenges, huge benefits with regards to cosmosis, less pain, and early return to work than laparoscopy made it one of the most sorted out technique of this decade. Specialized equipments and instrumentation necessary for this technique makes it expensive than laparoscopy but considerably cheaper than Robotic Surgery. With newer technologies and next generation of equipment, SILS could find more wider use among bariatric surgeons.